‘Many human diseases have their origin in micro-organisms’

1862 – ‘Memoire sur les corpuscles organises qui existent dans l’atmosphere’ (Note on Organized Corpuscles that exist in the Atmosphere) – Puts an end to centuries of debate on the theory of spontaneous generation.

Although a chemist, Pasteur is best remembered for his contributions to medicine. His name is used to describe the process of ‘pasteurisation’.
Pasteur proved that living microorganisms cause fermentation. Previously scientists had assumed that fermentation was a chemical process.
Pasteur showed that the alcohol in fermentation was made by the yeast microbe. He also realised that when fermentation went wrong it was due to other germs. 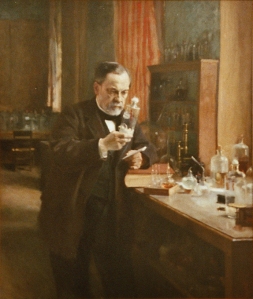 In 1863 he showed that brief, moderate heating of wine and beer kills germs, thereby sterilizing the foodstuffs and ending the fermentation process. The process now known as pasteurisation is still used in the food industry.

His investigations led him to believe that microorganisms could also cause disease in humans. Pasteur realized the dangers of infection, but the English surgeon JOSEPH LISTER (1827-1912) is credited with developing and systematizing the notion of antiseptic surgery so that operations could be made safer if an ‘antiseptic’ procedure was introduced to destroy microbes and curb the infections that followed wounds or surgery.

In 1876, Pasteur confirmed the findings of ROBERT KOCH’s discovery of the anthrax bacillus. After EDWARD JENNER’s breakthrough in the development of vaccination against smallpox, little had been done to take advantage of the potential of this treatment against other disease.

In 1882 Pasteur successfully applied his discovery of vaccination by attenuated culture of microorganisms to anthrax and in 1885 to the treatment of rabies in humans.

On 14 November 1888 the Pasteur Institute opened in Paris.